“Hey Nana, how come being happy and making your dreams come true are two different things?”

Few manga artists are able to tug at the heartstrings quite as beautifully as Ai Yazawa. Most of her work is usually cataloged under the shojo genre, which typically encapsulates an aesthetic, narrative and story themes that are most relatable to a young female audience. However, Yazawa’s art style is truly in a genre of its own. What makes her work last the test of time is the interpersonal relationships between her characters, coupled with a very nuanced way of showcasing emotion.

Runway Fashion in a Tankobon

Part of what makes Yazawa’s work iconic is the way she infuses her fictional worlds with real-world fashion, no doubt inspired by her time at fashion school. It’s hard to miss the detail if you’ve seen her early sketch works, exhibited at the recent “All Time Best Yazawa Ai” exhibition. Many of her characters exemplify distinct trends, whether that’s bohemian Junko in Nana, fairytale haute couture Joji in Paradise Kiss or vintage pin-up Mikako in Gokinjo Monogatari.

These looks are not only beautiful to look at, but they are also visual cues that provide insight into the characters’ preferences and motivations. The intersection of fashion and manga is most represented in Nana through titular character Nana Osaki, who has a flair for British punk and love for all things Vivienne Westwood. The distinct Westwood orb logo alongside the “Armour” ring, has long been emblematic to Nana and represents both the confidence she puts on for the stage and her own inner fragility. Love, Loss and Growing Up

Romance is a key part of most shojo titles and Yazawa’s work is no exception. Her mastery lies in weaving romance into character arcs, allowing her to place her main female protagonists on the cusp of a coming-of-age moment.

Despite being set in early high school days, Tenshi Nanka Ja Nai, sees protagonist Midori Saejima tackle difficult feelings including unrequited love, jealousy and the role of family constructs in society. The name of the manga itself, “I’m No Angel” is a nod to Midori growing into adulthood.

In Nana, Hachi originally represents a stereotypically female role in which she lacks any personal ambition other than to be together with her partner at the time. As the story develops, however, she matures and readers are able to see her emotionally support the other characters in a way that actually highlights the importance of motherly figures. 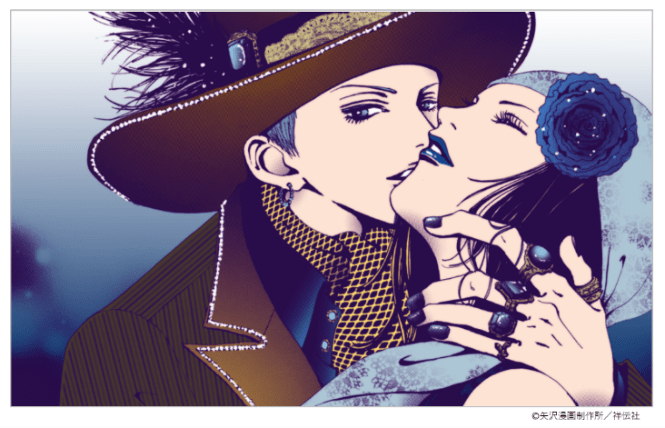 Exploring Yazawa’s work through time, readers are often met with an evolution in style and design. Beginning with her early works such as Kaze ni Nare! and Ano Natsu, Yazawa is seen to adopt classic shojo-style drawings with big eyes and slim builds. While cute, her characters are relatively simple.

It was only around the time of Tenshi Nanka Ja Nai when we started seeing her early explorations of trendy and unique characters such as Akira Sudou, who sports a ducktail hairstyle that was first popularized by rock and roll culture in the 1950s.  Yazawa pushes this angle further in developing more unique characters in her next series, Gokinjo Monogatari and then even more so with Paradise Kiss, a manga revolving around the life and drama of an eccentric group of students attending Yazagaku fashion school. The fashion premise allows her to really up the ante, developing characters such as the pink-haired Lolita-esque Miwako and Arashi, a British punk and visual kei inspired student with an iconic safety pin lip piercing. Nana remains Yazawa’s magnum opus, where it’s clear that her work is the sum of all of her experiences and skills gleaned from producing her prior series. The expressiveness of the eyes of her characters allows wordless scenes that fixate on close-up shots of characters’ faces to convey far more than any dialogue could. Character poses are runway-worthy, with comparisons drawn to excerpts from Vogue magazines and other high fashion media. Most notable of all are performance scenes featuring The Black Stones and Trapnest (the manga’s two rival rock bands) that have taken clear cues from real-life events and music photography, capturing true in-the-moment rock concert dynamism despite the limitations of black and white manga.

As of this year, Yazawa has confirmed in an interview published in Da Vinci magazine that she will still be unable to resume Nana, which has been on hiatus since 2009. No further information as to why was divulged, but many speculate that it is related to the health issues the author might be dealing with. Despite this, Yazawa’s work continues to impact each new generation of young readers eager to dive into a world full of beauty and possibilities with just a smattering of heartbreak.

As each of her titles has expressed, following one’s dreams may not be the recipe for happiness, but it is the pursuit of these goals that can supersede the impermanence of any emotion. Nana continues to be untouched by the passage of time. For now, though, the ending lies in the hands of readers who can use what they’ve learned and experienced in Yazawa’s work to live on.